In the days since news went ’round the interwobs about the death of Dungeons & Dragons creator Gary Gygax, I’ve come across a number of tributes to the man who was truly the Dungeon Master’s Dungeon Master. Some of these have taken the form of fond — and surprisingly candid — reminiscences about old D&D campaigns.

Two pieces in particular caught my eye: Jason Heller’s piece at The A.V. Club, about the impact of D&D on his “lack of a life”, and a piece by Wired editor Adam Rogers at the New York Times, which has some interesting things to say about yesterday’s D&D nerds being today’s Web 2.0 cyberlords.

I have a clear memory of being introduced to D&D in Grade 4. I’m fairly certain that the adventure involved an encounter with a carrion crawler (but then, show me an introductory D&D adventure that didn’t) and, possibly, a living statue. Or living ooze. Or living ooze on a regular, non-living statue. There was a statue, anyway. It may have been booby-trapped and concealing treasure.

At first I was fascinated mainly by the dice and the maps. By Grade 5 I was playing in a campaign with my friend’s Dad as Dungeon Master, and including among its players a number of guys from Melbourne University. Which was kind of intimidating for a 10 year old.

I started to get a sense of the storytelling at the heart of the game, the freedom to invent. One day while visiting my friend I discovered his Dad’s handwritten notes for an upcoming adventure, and piles of exercise books describing the campaign universe in exacting detail. The whole enterprise seemed huge, and compelling, and so much richer than regular life, or even the world of fiction. This was a fiction in which I was a player.

When I moved schools in Year 8 I discovered that people were playing D&D 550km away from Melbourne. Our Saturday night games through Year 11 and 12 weren’t dissimilar to today’s marathon internet gaming sessions in terms of duration, involvement of junk foods and surrounding air of fuggy fartiness.

I was still playing D&D a couple of years ago, playing in one campaign and running another, a gothic horror, slightly steampunk campaign set in Victorian London.

Adam Rogers’s New York Times piece describes the exhilaration of rolling up a new character or creating a new dungeon, and there’s a parallel to be drawn with the way we’re constantly signing up to new webapps:

Every Gmail login, every instant-messaging screen name, every public photo collection on Flickr, every blog-commenting alias is a newly manifested identity, a character playing the real world.

It’s true: every time we fill out a new profile and start hailing fellow internet travellers, it’s an opportunity to re-imagine ourselves, to roll-up a new character and go looking for rumours at the tavern.

“If novels are going to combust imaginatively, shouldn’t they be written spontaneously?” writes Hannah Davies.

"To many of us, a great deal of what we encounter daily is unexplained. It is possible to have received a good education and know nothing of science or technology."

A list of over 400 of the rarest modern English words, including a long list of unusual adjectives of relation.

The habits, rituals and small (and occasionally big) methods people use to get their work done. Includes a number of writers and artists.

I'm a sucker for Victoriana; the juxtaposition of grime and ornament, technology and the primitive, manners and monsters. Here's a fantastic blog offering glimpses into Victorian life, by an Australian but with a focus on Victorian London.

This blog by a historian and 'robot fancier' purports to "drop history like Galileo dropped the orange", so it's clearly down with it, homes, as well as being educational.

A look at the bizarre adventure-romance novels set in the Australian interior at the turn of the twentieth century, including George Firth Scott’s The Last Lemurian.

Just a quick note to say that I have a story in ‘Junk’, this year’s Visible Ink anthology, published by students of the Professional Writing & Editing course at RMIT. Some wonderful stories (mine possibly not included) and wonderful design (love the perfectly balanced typography on the cover, minor quibbles over the line-length of the internal text).

My story is called ‘Great Hoaxes of the Twentieth Century and Beyond’ and reveals a few things you might not know about Orson Welles. You can find out not much at all at the Visible Ink website.

Copyright remains with the authors so I may eventually put the story up on the site, though I’d urge you to buy a copy if you see it around. Anthologies like this make for great holiday season reading.

Fortunately, the error was not mine, and I was able to obtain not only the correct phone number but also, subsequently and consequently, the pleasures of a highly relaxing massage.

I doubt the same soothing ministrations were available to English printer Robert Barker when he left out a fairly crucial appearance of the word ‘not’ in the 1631 edition of the King James Bible. Crucial because the ‘not’ was part of the Seventh Commandment in Exodus 20:14, which normally reads ‘Thou shalt not commit adultery’ — but in Barker’s edition became a commandment of a much more liberating nature.

Barker’s bible became known as the ‘Wicked Bible’. (Wicked as in devilish, not as in ‘Gnarly dude, thanks for the God-sanctioned sex-action’.) Barker wasn’t sued, but he was fined — something like £300, which pretty much destroyed him.

He did, however, manage to squeeze in several weeks of Bible-approved fornicatin’ before a replacement edition was printed.

The London Illustrated News was the world's first illustrated weekly newspaper. This image library features a selection of woodcut illustrations from the newspaper dating from the mid-nineteenth century onwards.

A brief account of book smuggling in the British Isles in the late eighteenth century.

I was walking down my street this morning when I heard a tune both mournful and carnivalesque.

Around the corner walked a crusty, withered old rake playing some sort of sea shanty on a mouth organ. He wore a dark navy overcoat and tugged upon his grubby sailor’s cap as we bade each other good morning.

I thought how splendid it was that he was providing his own entertainment. I thought, “Wow, that’s so much better than carrying an iPod around”.

Then I thought, “Wait a minute, you can’t listen to a podcast commentary of last night’s episode of Doctor Who on a mouth organ.”

Spotted this on the 5.14pm Epping train. 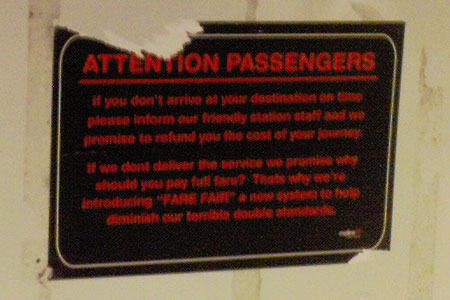 ATTENTION PASSENGERS
if you don’t arrive at your destination on time please inform our friendly station staff and we promise to refund you the cost of your journey if we dont (sic) deliver the service we promise why should you pay full fare? Thats (sic) why we’re introducing “FARE FAIR” a new system to help diminish our terrible double standards.

I was looking for quotes on the subject of time for an article I’m writing for work when I came across two very different ways of saying the same thing. This, from H. Jackson Brown Jr:

Don’t say you don’t have enough time. You have exactly the same number of hours per day that were given to Helen Keller, Pasteur, Michaelangelo, Mother Teresea, Leonardo da Vinci, Thomas Jefferson, and Albert Einstein.

This struck me as being a touch self-righteous. I much prefer Charles Caleb Colton’s way of looking at it:

Much may be done in those little shreds and patches of time which every day produces, and which most men throw away.

H. Jackson Brown Jr, by the way, is the author of Life’s Little Instruction Book. Colton was a nineteenth century English cleric, gambler and moonlight-flitter.

I know who I trust.

This combines my Dalek obsession with my iPod evangelism, which is all I really ask for in life.